explore SOLAS 128, a game of interconnected puzzles where you redirect and reconfigure rhythmic pulses of light to breathe life back into an ancient machine. at its heart, SOLAS 128 is a beam deflection game. rotate and reposition mirrors to connect light sources and unlock adjacent puzzles. every pulse is moving to the beat at all times, and each puzzle is connected to the next.

Explore this strange interconnected space, learn its rules, and discover the surprises that dwell within.

The full game contains:
– over 150 interlocking puzzle screens
– a beautiful synth-inspired visual style with a story where music powers everything
– designed from the ground up to be colourblind-friendly
– a seamless world to navigate - changes in one room will affect those that follow
– an original synth/chillwave soundtrack
– hidden areas to discover, and secrets to decypher
– no text or dialogue: the visuals and music speak for themselves

brought to you by Armor Games Studios

In order to download this game you must purchase it at or above the minimum price of $15 USD. You will get access to the following files:

this is a very silly comment, but somehow I noticed that the beige color here resembles and almost behaves like gant- the color that remains after all colors are eaten. i just think that's funny :D

Hi! I'm trying to play this game on the Steam Deck by adding it as a  shortcut in Steam and using Proton (it's the most straightforward way to run Windows games on SteamOS). Unfortunately, the itch version of the game gets confused by this, and tries to invoke the Steam version instead, which just opens the Steam store page since I don't own it there. Is there a workaround, or a fix you can make?

Thanks in advance! The web demo plays very well, by the way :)

I’m not the developer and have not messed with Proton either (only regular Wine on a regular Linux) but maybe try deleting/renaming steam_appid.txt?

Also there is a bit of a glitch where light beams graphically break up and “photons” stop moving when the game loses focus (might be caused by me playing on Linux through Wine, where the game works perfectly otherwise)

The “photon” stop bug is not just graphial, it is very annoying as I have to wait 2-3 minutes for the photons to reappear (travel all the way from the initial sources)

Hi, thanks for letting us know! We're not currently directly supporting Linux, unfortunately, so I don't have a workaround to suggest. The game will save automatically when you quit, however, if that helps!

At first look, I thought this might be style over substance. But then I discovered it's actually deep substance, just with an absolutely insane degree of style. The groove is mesmerizing, and makes the clever puzzles feel great to solve.

I had a lot of fun playing the demo! And I found the E-aster egg you left at the end :)

Reply
Casper The Helipilot307 days ago(-1)

I am stumped at the 4th room

If it is the room I'm thinking of, look to the edges! Otherwise, there are some playthroughs of the Prologue online which might help!

Just finished the demo. I know the interconnectivity is (one of) the game's major selling point(s), but whenever I realized the solution involved going back to an earlier screen, my reaction was always frustration. I prefer games where everything you need is already on screen and you already know what everything does, but the puzzles are still hard to solve, like Mitoosis (which is free). Would you consider going more in that direction for your next game?

P.S. I'm also not a fan of games that keep introducing new things so part of the puzzle ends up being simply figuring out how to use the new thing(s). I bring this up because the demo does this; I know there's a chance the main game stops introducing stuff after the demo ends, but I've been burned before on this and want to ask that your next game not fall into this unfortunately-all-too-common pitfall.

Thanks for the comment, and for playing the demo. This is part of the reason we were keen to release a demo, so people could get an idea of what the game was before buying it, to help ensure they'd like it before spending their money. I can't speak for my next puzzle game - but it sounds like you aren't a fan of the types of games I like to play or design. I hope you find a game more to your liking!

I found the hidden "E." Is there anything else to do in the demo, or do you have to buy the full game to continue?

well done, that puzzle is a tricky one! but yes, that is the last bit of the demo – the full game has all unique puzzles and more secrets to find!

awesome demo. I'm really thinking of getting it.

Thanks, I'm really glad to hear that you liked it! At the moment SOLAS 128 is in the Summer Sales if you do want to pick it up for 34% off!

play it on chrome browser

okay then imma play it if i can.

Context: You missed a secret near the end of the demo map. I am very disappointed :(

Thanks for your comment! As it goes, the neon depths of the demo and the main game are entirely hand-crafted by myself!

As for what the E *means* however... well, you'll have to complete the full game to find out 🤔

For a small demo, this made quite the impression! There were some puzzles where I had an "aha!" moment, which is always great. I especially loved the puzzle that led to the post-end secret, requiring most of the stuff you've learned about how the light beams work. Don't know what the secret itself means, but i'm seriously considering getting this game!

This game is actually ridiculously good. i'm considering getting it.

this seems like a good game but it just hurts my eyes so damn much it became unplayable I have no real eye conditions so i'm confused as to why the small bit of game that I did play was fun tho but all in all 3/5. fuck my eyes hur

Hi there, sorry to hear you had issues with the visual effects. If it helps, almost every effect can be turned down or off in the settings menu if you'd like! The Accessibility Update dev log has more details!

Good graphics, musics, effects, unique way of expressing laser mechanics that can usually be seen in other puzzle games. Some of the puzzles are quite hard, but overall a 10/10 experience.

best game i have ever seen

I luv its such a good game

Thanks, glad you enjoyed it 💜

Thank you! I'm so happy you enjoyed it! (If you want to pick it up sometime, the full game gets *wild* by the way)

bro, this is an awesome game this is a 100% want to buy. I also liked how you ended off the demo with E. thanks for the fun

Thanks very much for the kind words, I'm glad to hear you liked it! (And well done for finding the secret letter too – there are more hidden in the full game!)

Do you get a Steam Key for the game if you buy on itch.io?

Hey there! No, we've not giving out Steam keys with an itch purchase. If you'd like it on Steam, we also have it on sale there too at the moment, though!

Excellent use of neon! i wish i were smart enough to figure out how to get past the first few levels, but the concept and art are brilliant!

Thanks so much for the feedback, I'm glad you liked it! The [?] button will give you some hints if you need them, too. (oh, and you didn't hear it from me, but there are some walkthroughs out there if you want more help too) 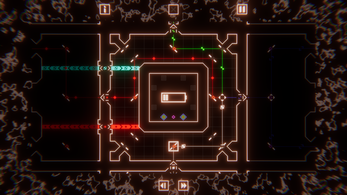 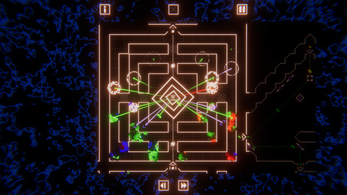 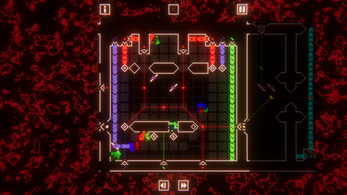 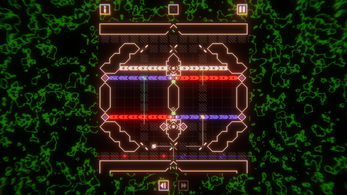 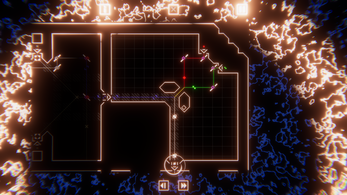