Hello everyone! Welcome to this month’s devlog! This one will be about what I did this month, and also text speed in video games.

Anyway, if you just stumbled upon this, I am Adrienne, also known as insertdisc5! I’m the developer, writer, artist, main programmer, etc of the game. The game being In Stars and Time, which is the next and final game in the START AGAIN series, following START AGAIN: a prologue (available here!).  You can find out more about In Stars and Time here!!!

ALRIGHT LET’S GET TO IT

I've had quite the productive month, mostly because I took a one week break from my day job to chill and rest and work on the game. Which means…

Act 3-4 is more or less complete and implemented and tested!!! I say "more or less" because I'm still missing a few illustrations, and a few sidequests I'd like to add. BUT!!! The main story for those acts is complete!!! YAHOO!!!

I've also been drawing a bunch, which hasn't happened for a little bit. After months of not drawing, I hung out with a friend and we drew together, which helped me unblock myself art-wise! THANKS, FRIEND!!!!! Anyway here’s one cryptic illustration, just for you guys. 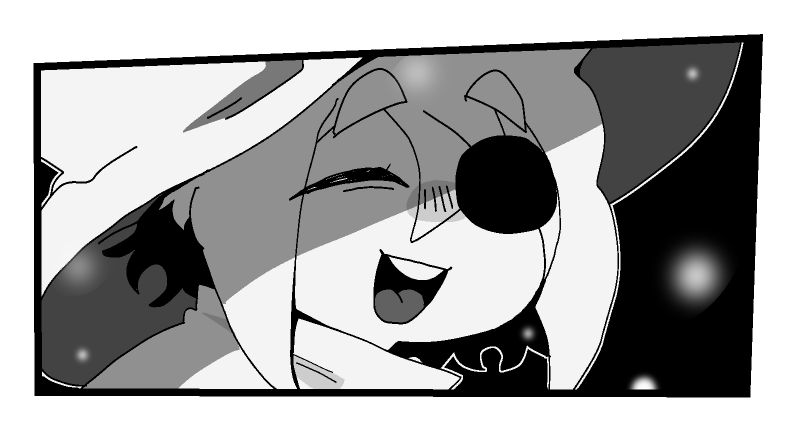 I’ve also been playtesting the game from beginning to (temporary) end! I haven’t done that in a while, so it was interesting to play it in its entirety and see what works, what doesn’t (and needs to be fixed), and also the parts that are broken code-wise and I need to jump into and figure out. There’s less of those than I anticipated though, so: YAHOO

I do want it on the record that while playing through I knew what was going to happen (of course I did, I wrote the damn thing), but I did get some very fun moments that made me go “oh god!!!! That’s really good!!!!!! Who wrote this!!!!” I wrote this. It’s always fun to feel surprised by your own work, and it happened a bunch, so I’m very happy!!!

And now it’s on to scripting the few things for Act 3-4 I have left, and then finally jump into scripting for the final acts, Act 5 and 6. I’ve had the base for the events written down for a very long time, as well as countless notes on “ok we GOTTA MAKE SURE that this thing happens”, so it’ll be a matter of sitting down and making sure all those notes become a cool thing. Which it will, because, come on guys (I strike a pose) it’s me.

What else, what else… Oh! Somehow I found myself wondering about text speed this month.

I’ve asked my followers on twitter what text speed they preferred in their games, (buzzfeed voice) AND THE ANSWERS WERE SURPRISING (not really) 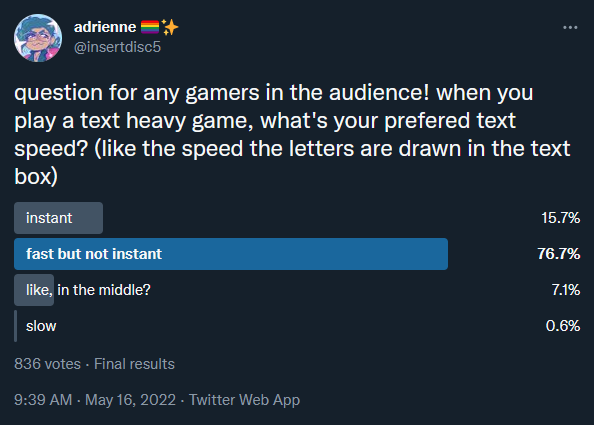 A few random ramblings about text and dialogue in video games:

-I found it very interesting that most people set text speed to fast-but-not-instant (FBNI speed!), and that people using instant speed were relatively low. It almost made me wonder if I should just force the player to play the game at FBNI speed (kinda like how Ace Attorney forces you to use one speed), but hey. If I can add options, might as well add them.

-Many people also love when, if your text speed isn’t instant, you can press A while the text is still appearing to make the text appear all at once! Thank god this is already a thing in RPGmaker and I don’t have to figure it out myself. What I DID figure out is how to make this NOT happen, for important moments! Again, you will go at MY pace, player!!! It’s a fun, subtle way to catch the player off guard, so I’m glad I figured it out, teehee.

-One of the reasons I was wondering about text speed is that I’m a very fast reader, and I didn’t really take that into account when I made START AGAIN: a prologue! I had a few dialogues where the text would advance to the next box on its own, without player input, mostly when a character would interrupt another or something like that. Because it’s fun and cool! Haha they interrupted this character so the text box advanced on its own! How realistic! What a good use of video game code powers!

But here’s the thing: some players (especially streamers, who read everything aloud) did not have time to read what was on screen before it went away! And if they had the text speed on instant, the code made it so that they would get literally one frame of text before it went away! AND THAT’S NOT GOOD!!! So for ISAT, I made sure I would add text that advances automatically VERY rarely, and when I did (because, again, it’s fun and cool), I made sure the text speed would slow down significantly, and the text would stay on screen for as long as it took me to say aloud a few times. So you are welcome, slow readers everywhere. Sorry it took me so long!!!!

That’s it, that’s all for today! Let me know if you have any questions, or if there’s any aspect of the game development struggle you’d like me to talk about! See you next time!!!

AND DON'T FORGET TO WISHLIST THE GAME ON STEAM IT REALLY HELPS BECAUSE STEAM’S ALGORITHM IS MORE LIKELY TO SHOW OFF GAMES WITH A HIGH AMOUNT OF WISHLISTS THATS THE REASON WHY GAME DEVS ALWAYS ASK TO WISHLIST!!! OKAY BYE!!

Can't wait for the game to be out!!  Thank you for the update and your work!!!