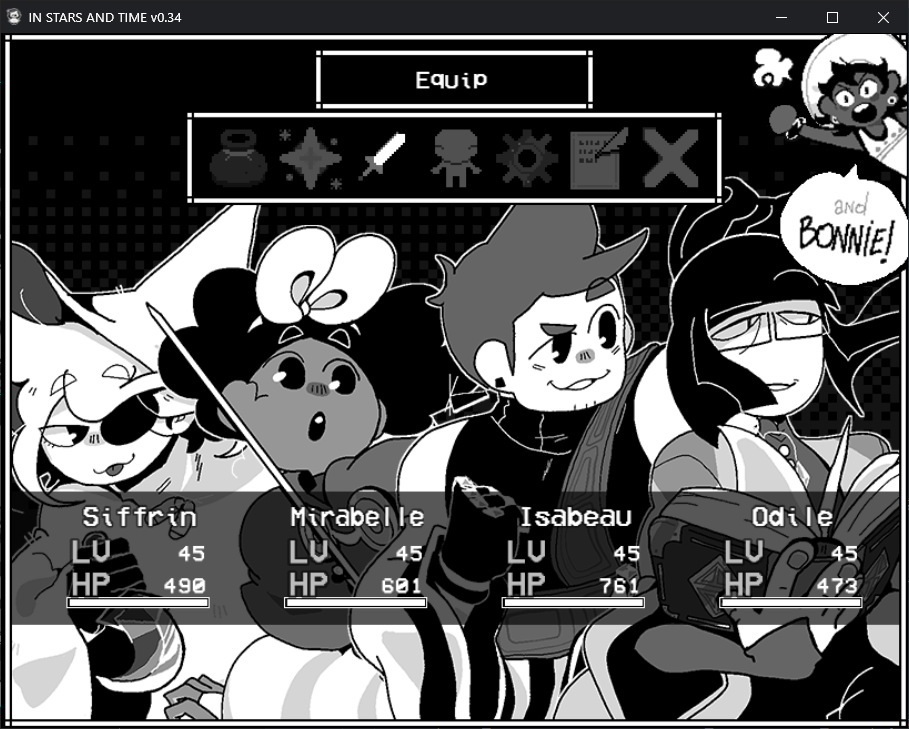 Hello everyone! Welcome to this month’s devlog! This one will be about good ol’ writing, because that’s what I did this month.

Anyway, if you just stumbled upon this, I am Adrienne, also known as insertdisc5! I’m the developer, writer, artist, main programmer, etc of the game. The game being In Stars and Time, which is the next and final game in the START AGAIN series, following START AGAIN: a prologue (available here!).  You can find out more about In Stars and Time here!!! ALRIGHT LETS GO LET’S TALK ABOUT WRITING STUFF

Made good progress this month! I’ve been dividing my time between making sure the script for the next big chunk of the game is done and good, and adding all those dang words to the game. Happy to say the script for that next chunk is done! (until I realize I’ve forgotten a key scene that would make the story flow better, of course).

Glad you asked. The game is divided into six Acts, with wildly different lengths (Act 2 being the biggest, and Act 6 being the smallest). I’m working chronologically because apparently it helps with the Game Dev Process. So right now, after finishing Act 1 and 2 earlier this year, I’m working hard on Act 3 and 4, which are similar enough for me to be able to work on at the same time. So that’s what I’m doing! Working on the script for Act 3 and 4. Which is done. Yahoo!

“Well, can you show us anything cool???”

It’s just text, babes. So I guess it’s time for an impromptu ~How I Write Things~ post, teehee.

I mostly use OneNote to write and compile all my notes! For the prologue I used to just use basic text files, and let me tell you, text files aren’t the best way to write down notes. OneNote allows me to have all my dang notes separated into tabs and even smaller tabs, which is just. A godsend. Highly recommend it if you need a notes organizing software (It’s free!). 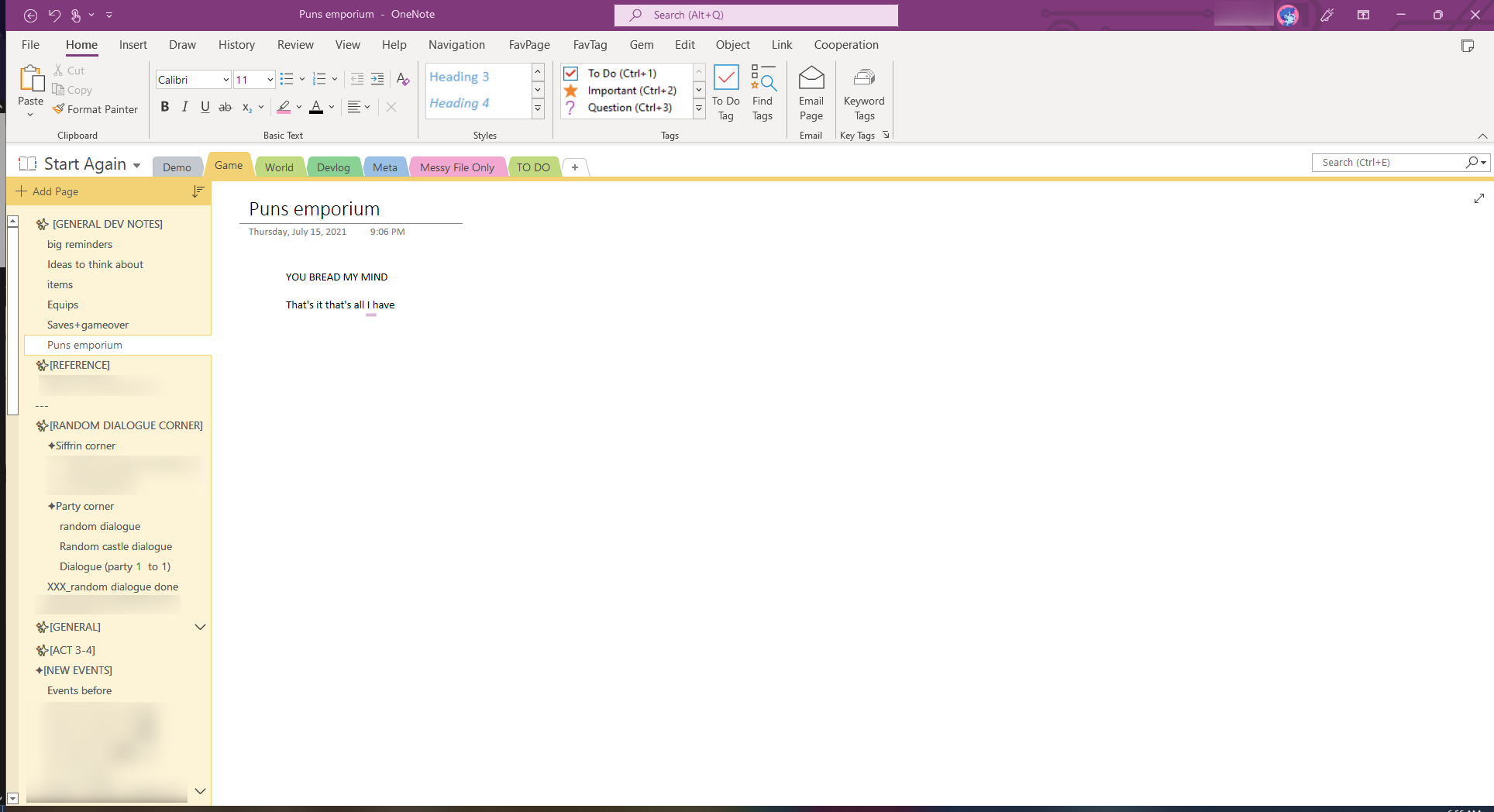 This is the “Game” tab with all my organized notes for the whole dang game. On the side (big yellow column) is where all the sections are, which I’ve divided roughly into “Big General Game Notes”, and then “Acts”, and then even smaller “Specific Moment In The Act” sections. I divide them in a way that just makes it easier for me to find specific notes again!

If you look closely, I also have a “Messy File Only” big tab, where I just put all my notes down, and organize them later. My Messy File is so big I’ve actually had to divide it into smaller Messy Files. I just have a lot of ideas in this brain (they’re not all good. Some of them are quite bad, but I still keep them just in case, and also because it’s interesting to see where my brain was at) 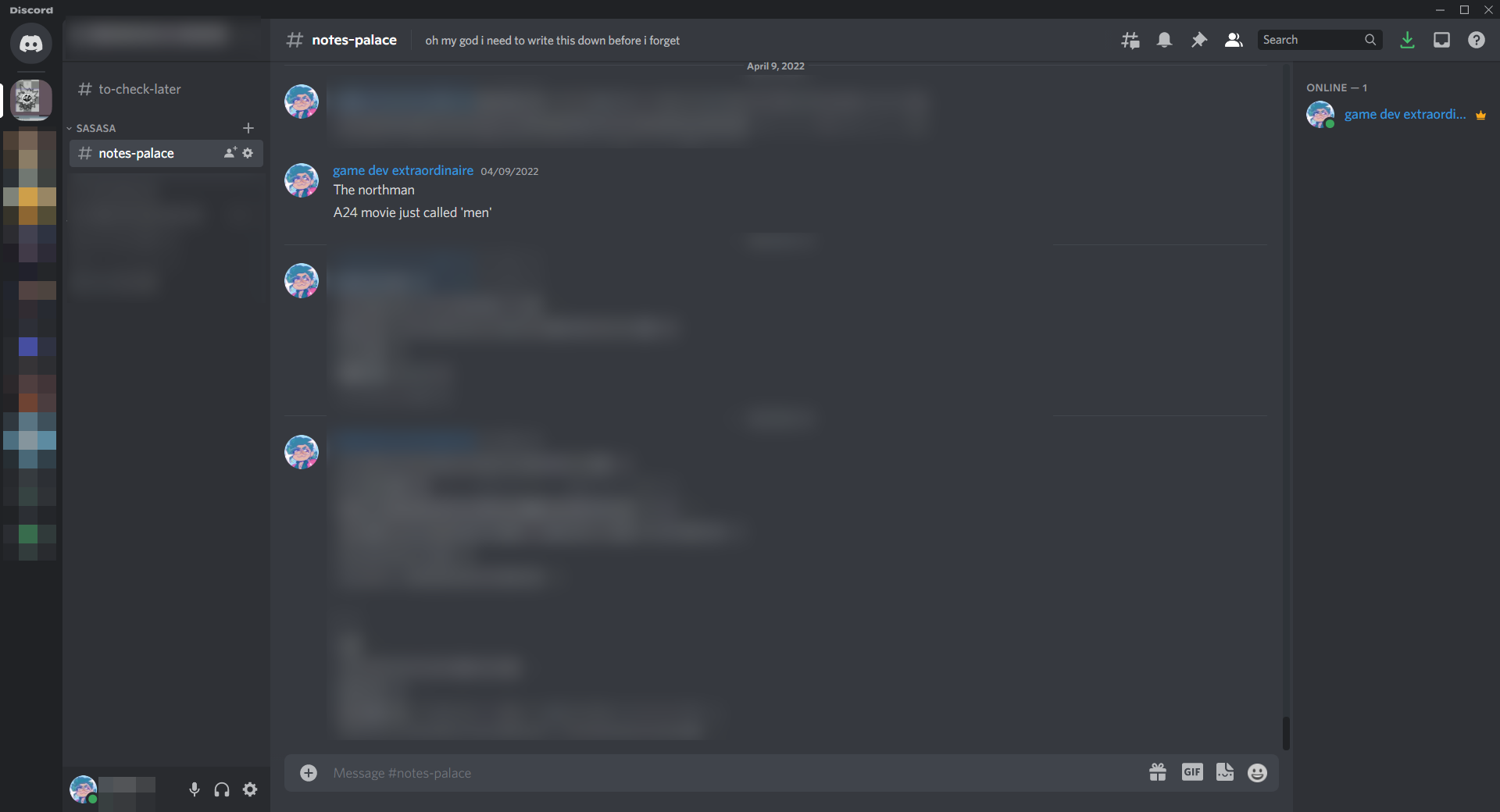 I have a private Discord Channel just for me. Here you can see it with all the notes blurred, except for one saying “The northman, A24 movie just called “men”, because I went to see a movie and those two trailers were interesting and I needed to write them down y’know.

I can access this channel on my phone and ipad, so if I get an idea and I’m away from my computer I can just write the idea there, and add it to the “Game” tab later! Don’t forget, kids, having easy ways to write down your notes is key. Don’t you hate it when you get a good idea and go “ha, I’ll remember it later”, and then you don’t. MAKE IT EASIER FOR YOU TO WRITE THINGS DOWN

I’ve also gotten better at motivating myself to write, especially since Act 3 and 4 are VERY LONG. And unlike Act 1 and 2, I didn’t have previous notes to fall back on. So I have a little note reminder on my second screen to remind myself of how to fall into The Writing Zone. 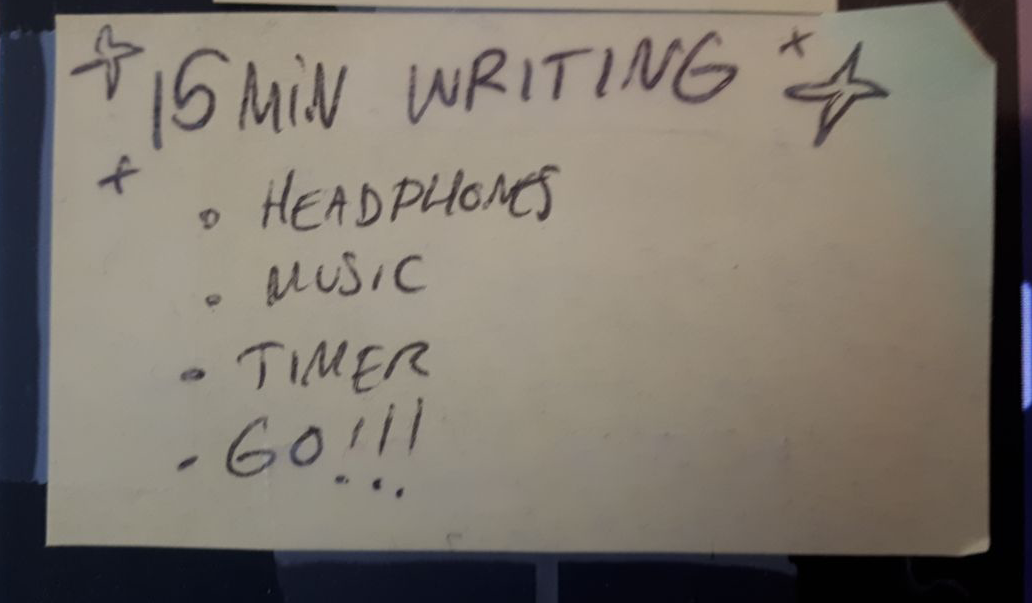 This is how I found out I do the best work, maybe it’ll help you if you’re also struggling with actually sitting down and writing things. I just put my headphones on, start my “CONCENTRATE!” playlist (full of electronic music and dubstep and stuff, because loud wub-wubs is how I concentrate), I put a 15 minutes timer, and I just write. The 15 minutes is a number I usually hit without thinking, and is just here so I can say “yay I hit my goal!”, but I usually end up writing for closer to an hour teehee. Always make your goal easier than what you think you’ll do, so you can feel better at breaking your goal. That’s how to fall into The Writing Zone (for me at least!).

That’s it, that’s all for today! Let me know if you have any questions, or if there’s any aspect of the game development struggle you’d like me to talk about! See you next time!!!

AND DON'T FORGET TO WISHLIST THE GAME ALSO IT REALLY HELPS BECAUSE STEAM’S ALGORITHM IS MORE LIKELY TO SHOW OFF GAMES WITH A HIGH AMOUNT OF WISHLISTS THATS THE REASON WHY GAME DEVS ALWAYS ASK TO WISHLIST!!! OKAY BYE!!!